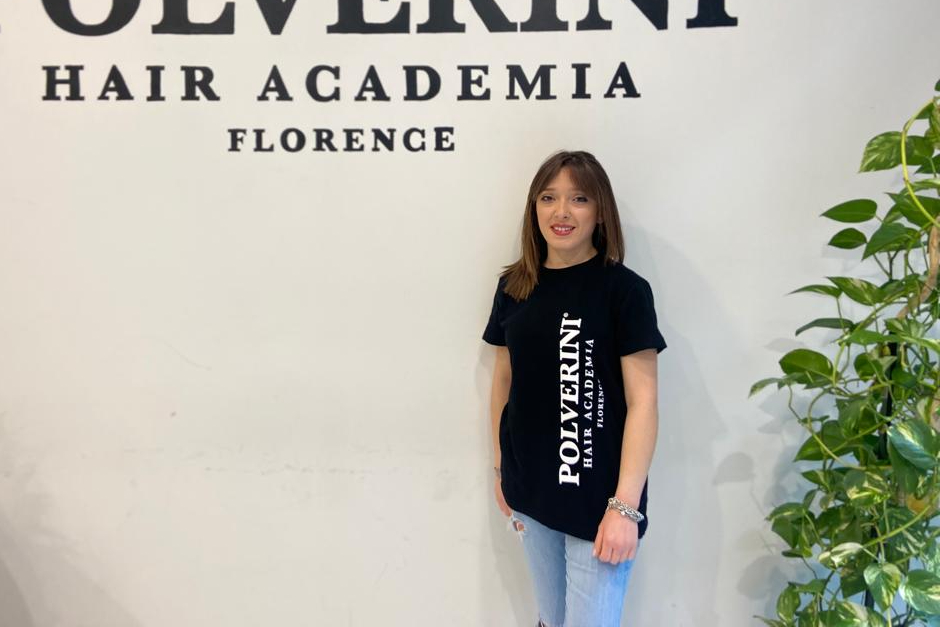 Born and raised in a small town in Molise, Maria Concetta always knew she wanted to become a hairstylist. Although when she was little, just like anybody, she saw her dream like a distant and unreachable destination. With time, she realized that she could stop or refrain her passion, so after graduating high school, she immediately started working in a hair salon in her small town.

Starting from zero knowledge, she spent 7 years there working as a hairstylist. Maria Concetta started to feel out of place: she felt like the technique was missing. After becoming aware of this, she started looking around for academies that could gave her all the knowledge she needed. After looking on the internet, she identified three possibilities: Rome, Florence, and Milan. Maria Concetta starts from Rome, but when she enters the academy, she already knew that was not the right place for her.

The meeting with Polverini Hair Academia

A week later she travels to Florence after she booked an appointment right here, at Polverini Hair Academy. Maria Concetta intuitively knows this is the place. She trusts her gut and signs the contract. When the courses start, everything feels exactly right and she has a great relationship, both with the students and the teachers. After finishing the color and the blow-dry course she goes back to Molise to work in the salon she had worked in for 7 years. Before going back, she gets the wonderful opportunity to work in the Polverini hair salon in Forte dei Marmi.

While in Molise, Maria Concetta counts the days till her return in Florence: each day grows stronger the will to change her life, but also the awareness that this life does not belong to her anymore. She always knew, but Maria Concetta did not want to think about the big choice she would have to take. Moving to Florence meant that she had to leave the salon where she grew, but also leaving the stability of her job to face a future she did not know. Despite being afraid of the change, she knows that to make her dreams come true, she must put everything on the line, and after spending her whole life putting other people first, this is her turn.

Today Maria Concetta is finishing the basic cut course and starting the advanced cut course, and in June she will start to work in the Polverini Hair Salon in Forte dei Marmi. And so, she starts a new chapter in her life, with uncertainty but also many hopes and ambition. For the future, she hopes to become part of a team in charge of creation or formation, but one thing is for sure: she wants to be a hairstylist.

This is one of many success stories; people that, like Maria Concetta, were able to achieve their dreams thanks to Polverini Hair Academia. If you also dream of becoming a professional hairstylist, click down here to book an appointment at the academy.